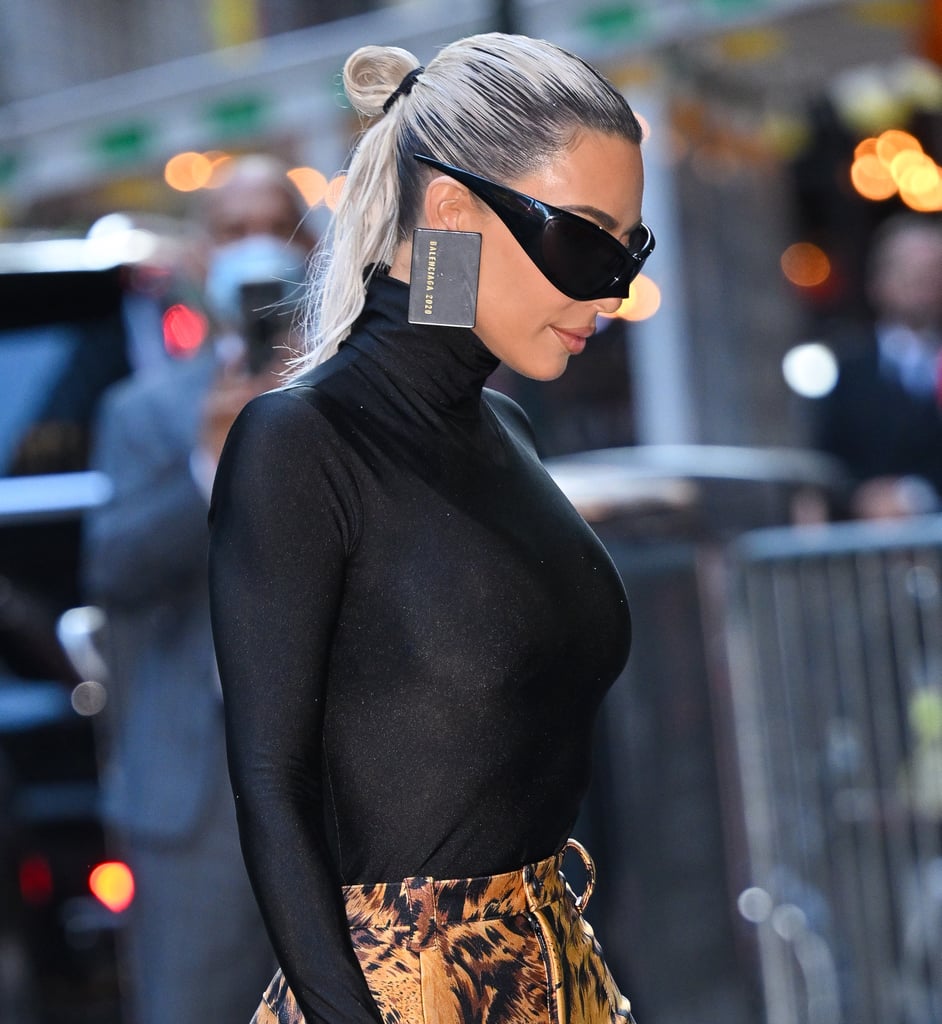 Gretchen Wieners may have tried her darnedest to make "fetch" happen on "Mean Girls," but Kim Kardashian is trying even harder to make a divisive hairstyle happen. The Skkn by Kim founder has been spotted on multiple occasions this past month wearing an updo her hairstylist, Chris Appleton, has dubbed the "wet flip bun." The name may sound odd, but it's essentially that bun-ponytail hybrid you lazily toss your hair into while working from home. Yep, you know the one.

To achieve the look, Appleton slicked back Kardashian's bleached hair and gathered it at the crown of her head with a black elastic. Rather than pulling the ponytail all the way through, he created a small bun on the final loop and left several inches of wavy hair dangling underneath, reaching past her neck. Overall, the hairstyle is pretty low-effort and achievable, which can't quite be said for most of the Kardashian family's beauty and fashion moments.

Kardashian first stepped out with a wet flip bun while attending a Kylie Cosmetics launch party with her family on 24 Aug. It was a noticeable switch-up for the aspiring lawyer, who'd been consistently wearing her hair down and wavy or in voluminous Pamela Anderson-style buns throughout the summer. Since then, she's worn the intriguing hairstyle several more times, including at Fendi's New York Fashion Week show and for her "Good Morning America" appearance on Sept. 20.

Though Kardashian is clearly digging the bun-with-a-tail look, her fans have mixed feelings. When Appleton shared TikTok footage of her with the hairstyle, one follower commented, "that hair is what i accidentally do when i'm rushing and making a pony," and another added, "But u forgot to do her hair." Others defended it, one chiming in, "Guys the hair is chic please," and another writing, "Finally a relatable hair! That's me in high school after volleyball."

So, will the wet flip bun become the new "it" hairstyle of 2022? Only time will tell, but if anyone can make it happen, it's Kardashian. See photos of the businesswoman's latest beauty obsession ahead to decide whether you'll be emulating it soon.

Related:
Kim Kardashian Might Convince You to Bring Back Your Side Parting
Previous Next Start Slideshow
HairCelebrity BeautyChris AppletonCelebrity HairKim Kardashian