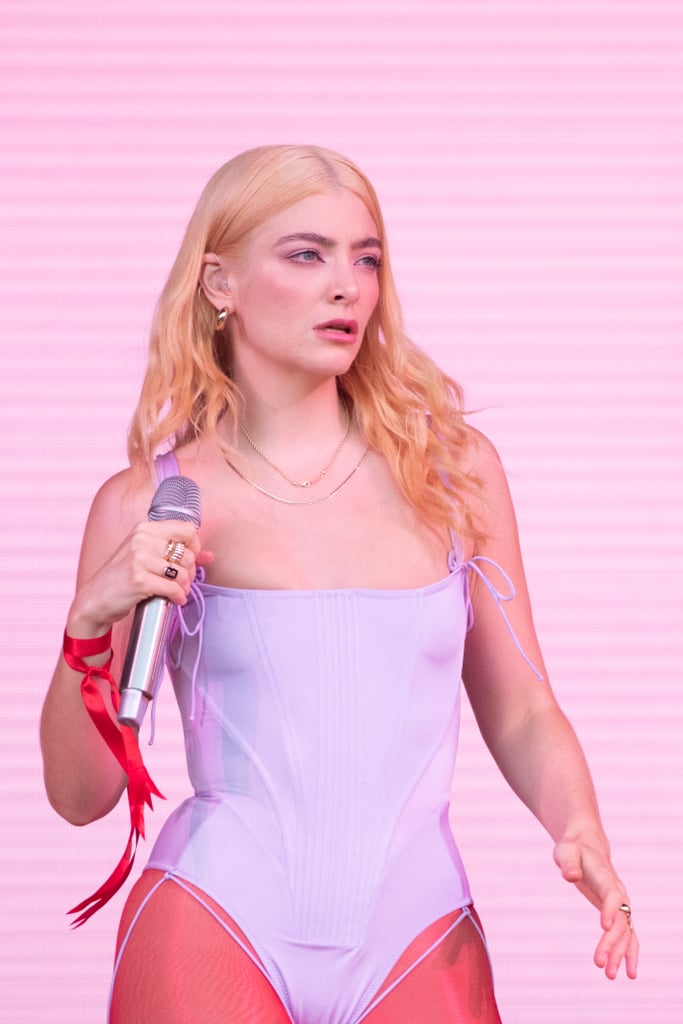 Glastonbury Festival is a chance for celebrities and festivalgoers to let loose, dance along to incredible live music, and embrace new fashion and beauty looks. This year, New Zealand singer Lorde was no exception. The 25-year-old might usually sport a head of brunette curls, but she chose to debut her new blonde hair as she performed on the Pyramid Stage on Sunday afternoon.

Opening her set with single "The Path" from her most recent album, "Solar Power", she wore a lilac corset that was tied around the thighs and layered over pink tights. Lorde's bleach-blonde hair was styled into a middle parting with subtle waves through the ends. The singer had previously showcased a blonde hairstyle in the music video for "Mood Ring" where she channelled the lifestyle of wellness influencers, but fans were not expecting her to have changed up her look off camera.

Blonde hair wasn't the only talking point of Lorde's performance, though. She brought two of her best pals on stage with her, giving the crowd a lot more than they had bargained for. Arlo Parks and Clairo joined her to perform her song "Stoned at the Nail Salon".

And, like Olivia Rodrigo, Lily Allen, and headliner Billie Eilish, Lorde took the opportunity to use her platform to denounce the devastating US Supreme Court decision to overturn Roe v. Wade, which has taken away the rights of pregnant people to choose to have an abortion in the US. She said: "Wanna hear a secret, girls? Your bodies are destined to be objectified since before you were born. That horror is your birthright. But here's another secret. You possess ancient strength, ancient wisdom, wisdom that has propelled every woman that came before you. That wisdom is also your birthright. I ask you today, make accessing that wisdom your life's work. Because everything depends on it." Lorde then added, "F*ck the Supreme Court," as the crowd erupted into cheers.

Taylor Swift
Taylor Swift Responds to Plagiarism Lawsuit: "The Lyrics to 'Shake It Off' Were Written Entirely by Me"
by Eden Arielle Gordon 2 days ago