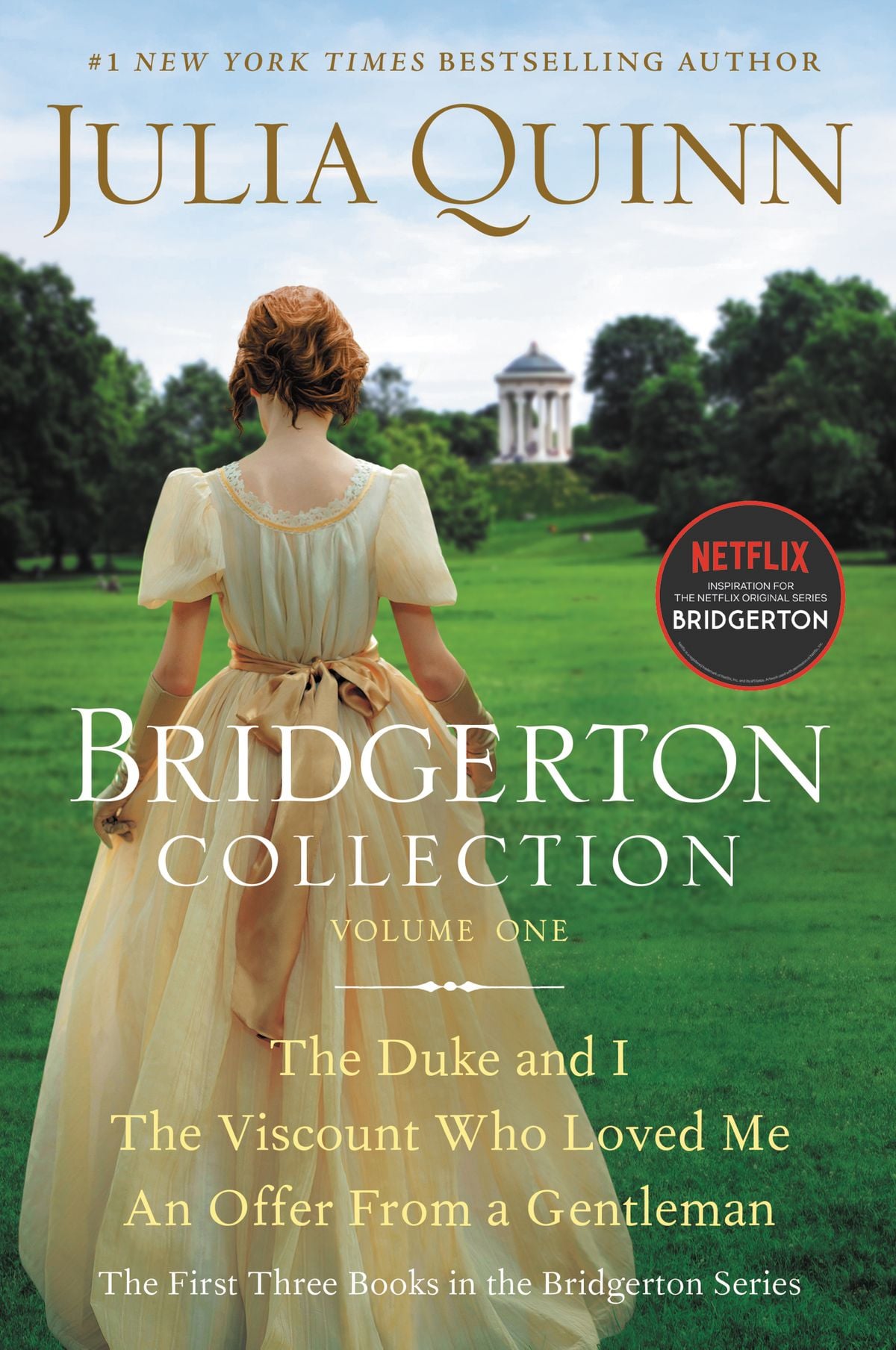 Set in Regency-era England, Julia Quinn's Bridgerton novels are sure to ruffle the petticoats of anyone who loves a good historical romance. If you've been shipping Lizzy and Mr. Darcy since you first read Pride and Prejudice, you won't be able to put down Quinn's bestselling book series, which has been made into a Netflix show. The basics: The Bridgertons are a well-known and respected British family of eight siblings and their widowed mother, the wife of the late Viscount Bridgerton. The alphabetically named siblings, Anthony, Benedict, Colin, Daphne, Eloise, Francesca, Gregory, and Hyacinth, navigate the frills and thrills of upper-class society while finding love in the most unexpected ways. Here's everything you need to know about the nine Bridgerton novels!

Book one of the Bridgerton series features Daphne Bridgerton, the fourth-eldest sibling. Daphne is kind, witty, and nurturing, yet no one considers her marriage material, mainly because she's never afraid to speak her mind and refuses to act like a submissive wife. When Daphne agrees to take part in a fake courtship with the Duke of Hastings, Simon Basset, love is the last thing on both of their minds. But despite how much they try to pretend, the two end up developing very real feelings for each other, and Daphne's life is forever changed.

Book 2: The Viscount Who Loved Me

Infamously known as London's most elusive bachelor, Anthony Bridgerton is finally planning to settle down and marry, and he has his eyes on the beautiful Edwina Sheffield. But Edwina's sister Kate has other plans. Determined to protect Edwina from a loveless marriage with a former rake, Kate has no issue meddling in their relationship. But her and Anthony's rivalry takes a 180-degree turn, and she finds herself in a forbidden love triangle.

Book 3: An Offer From a Gentleman

After sneaking into Lady Bridgerton's annual masquerade ball, Sophie Beckett, the daughter of an earl, falls into the arms of the handsome, debonair Benedict Bridgerton, who she is sure is her Prince Charming. Though Sophie wants nothing more than to dance with Benedict forever, she must keep her identity a secret from him. But Benedict's heart is captivated, and by the end of the night he's sure he wants to spend his life with Sophie. Desperate to find the mysterious woman he danced with, Benedict refuses to give up his search, and what was supposed to be a forgettable night of dancing turns into a lifelong love.

Colin Bridgerton has been deemed the most desirable husband in all of London, and Penelope Featherington has been in love with him for as long as she can remember. Considering that she's best friends with his sister, Penelope is confident that her love story with Colin is easily within reach. But even after years of pining after him, Penelope discovers that establishing a relationship with her best friend's brother is turning out to be more than what she bargained for.

Book 5: To Sir Phillip, With Love

Eloise, the fifth-eldest Bridgerton, has no issue waiting to marry. Though suitors believe she's desperate for a marriage offer, it couldn't be further from the truth. But when Eloise catches the attention of Sir Phillip, a man she's never met, she finds herself torn between societal expectations and self-respect. Then, for the first time in her life, Eloise gives into the power of love.

Book 6: When He Was Wicked

Just 36 hours before Francesca Bridgerton is supposed to say "I do" to her husband, she meets Michael Stirling. But not only is Michael one of the most infamous rakes in London, he's also her future husband's cousin. Francesca refuses to think of Michael as anything other than a dear friend, but years later when she finds herself widowed, Michael makes his way back into her life, and Francesca gets the happy ending she wanted all a long.

Hyacinth Bridgerton is smart and spunky, and, most importantly for Gareth St. Clair, she studies Italian. Gareth's devious father has threatened to ruin his inheritance, and the only hope he has lies in the contents of an old family diary, which is written entirely in Italian. Seeking help from Hyacinth and her Italian language skills, Gareth not only finds the answers that he was looking for, but also the love that he wasn't.

Book 8: On the Way to the Wedding

Gregory Bridgerton is a hopeless romantic, and he's more than ready to be married to the woman of his dreams, Hermione Watson. Completely blindsided by the fact that Hermione already has a lover, Gregory is left heartbroken. Desperate to win her over and make his dreams come true, he turns to Hermione's best friend, Lady Lucinda Abernathy, for help. Nothing seems to be going his way until Gregory comes to a life-altering realisation — the love of his life isn't Hermione, it's Lucinda.

Book 9: The Bridgertons: Happily Ever After