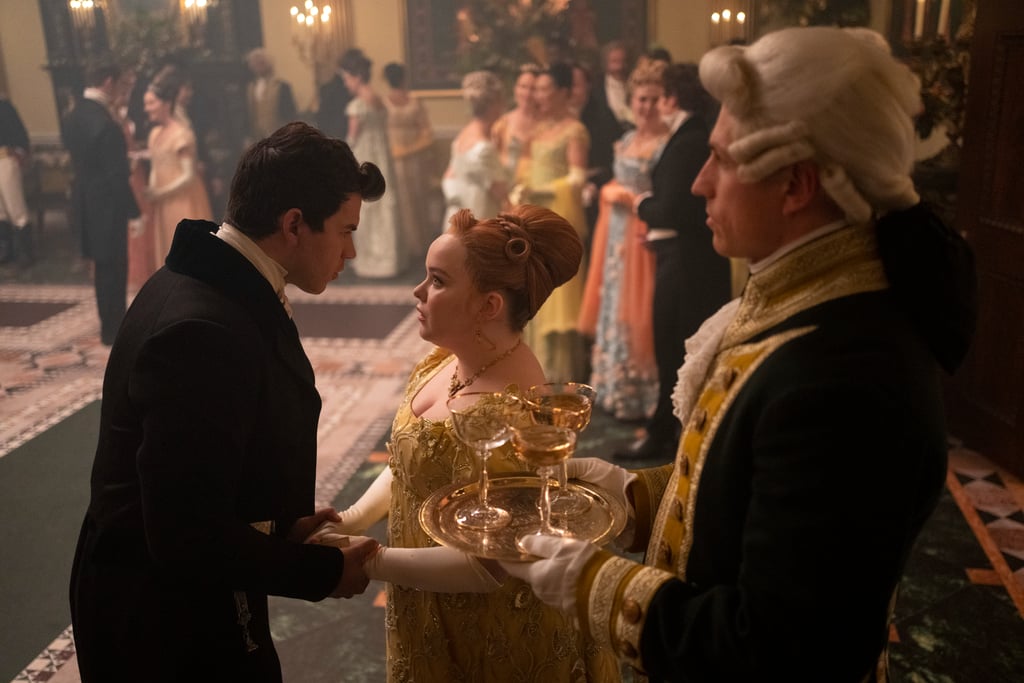 Everything We Know About "Bridgerton" Season 3, Including the New and Returning Cast

"Bridgerton"'s Lady Whistledown is finally ready to step out of the shadows in season 3. In a video from Netflix's fan event Tudum, Nicola Coughlan revealed the title of the third season's premiere episode, "Out of the Shadows," and even read Penelope Featherington/Lady Whistledown's introduction, which will feature Pen and Colin taking centre stage.

In her first column of the season, Coughlan's Whistledown hints that not all ladies shine like diamonds, but they can still command a room. "Dearest gentle reader, we've been apart for far too long," she reads. "At last, London's smart set has made its return, and so too has this author. As the season begins, the question on everyone's minds is, of course, which newly minted debutante will shine the brightest. The crop this year appears to be dazzling indeed. Unfortunately, not every young lady can attract the light."

Filming on "Bridgerton" season three officially began in the summer with Netflix releasing a teaser video on 20 July with key cast members, including Nicola Coughlan, Jonathan Bailey, Adjoa Andoh, and Luke Newton. Everyone featured in the video holds up two fingers and then adds a third to signify they have transitioned from season two to three. Newton, who plays Colin, then opens the door of a carriage to reveal Coughlan as she announces the news we've all been waiting for, with Newton declaring: "Let's go."

"I really feel like it's Colin and Penelope's time. Because we've been watching both of these actors on our screens since season one, we've already invested in them a little bit."

In a June interview with Variety, Coughlan also teased that Colin and Penelope's romance may be steamier than fans might be anticipating. While Penelope has been in love with Colin since the series began, the third Bridgerton son has been oblivious to her feelings. That's all set to change in season three, and after the slow-burn romance of Kate and Anthony, Pen and Colin could return the hit Netflix series to its sexy season-one roots.

When asked if Penelope and Colin would be steamy, like Daphne and Simon, or slow burn, like Kate and Anthony, Coughlan suggested the show's latest duo will give fans season one vibes. "I think, because we've had two seasons of build up, it's probably going to be the former," she said to Variety. "I haven't read the scripts. I've just been given an overview."

Back in early 2021, just weeks after announcing the show's season two renewal, Netflix picked up "Bridgerton" for a third and fourth season. Thanks to what we already know from Netflix (and from Julia Quinn's Bridgerton book series), we have a few ideas about what we can expect to see.

On 16 May, Netflix confirmed that season three will tell Colin and Penelope's story. If the show followed the order of the books, season three would've followed the second-oldest brother, Benedict, but Netflix decided to adapt the plot of the fourth book, "Romancing Mister Bridgerton," instead.

"I really feel like it's Colin and Penelope's time. Because we've been watching both of these actors on our screens since season one, we've already invested in them a little bit. We know who they are as people," "Bridgerton" showrunner Jess Brownell explained to Variety at the time. "I feel like, especially in the last season, there are these moments of tension between them where it's like, Colin walks up to the line of almost realising that Penelope has feelings for him but doesn't quite get there. Instead of treading water on that dynamic, we wanted to push it into their season. It really felt like the perfect moment to tee it up."

Keep reading for everything we know so far about the highly anticipated third season of "Bridgerton."