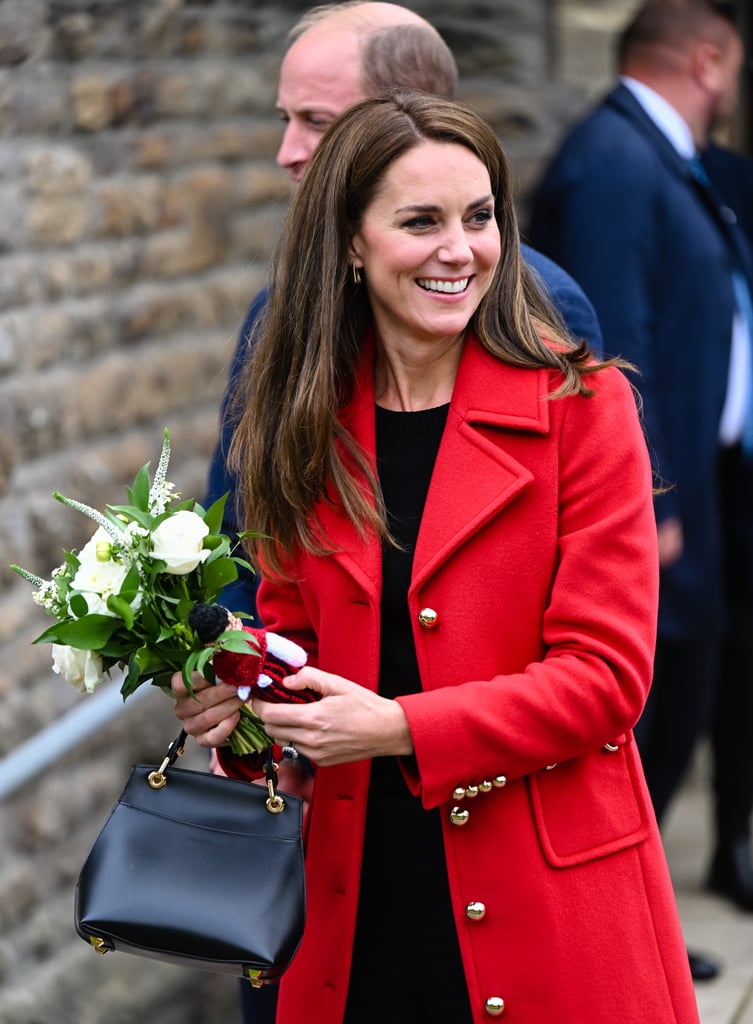 Prince William and Kate Middleton visited Wales on 27 Sept., arriving at St Thomas Church in coordinating tailored looks. In a sentimental nod to Princess Diana (whose maiden name was Spencer), Middleton, or the new Princess of Wales, wore a red "Spencer" coat from L.K. Bennett that featured wide lapels, side pockets embellished with gold horse-bit detailing, and a gold button-front. She layered it over a black round-neck shirt and wide-leg trousers and amped up the glam with gold Alia Hoops from Spells of Love, a small jewellery studio located in the heart of Wales. A pair of pointy black heels and gold-detailed top handle bag from Grace Han rounded out the look, which exuded easy elegance.

Next to her, William looked equally imperial in a navy blue blazer and matching trousers, worn over a light blue shirt and dark blue tie. The visit follows Queen Elizabeth II's funeral, for which Middleton selected a piece of jewellery that was similar to what the queen herself had worn during times of mourning or remembrance. In a beautiful tribute to Elizabeth, she sported a four-strand pearl choker boasting a bulb-shaped diamond clasp at the centre. Clad in a blazer-style dress and a veiled headpiece, she sat front row during the funeral, alongside King Charles III and two of her children, Prince George and Princess Charlotte.

Following the period of mourning, the couple received new royal titles — Prince and Princess of Wales — and went on to fulfil their duties in Wales. Ahead, re-create Middleton's look with the exact coat, bag, and earrings she wore.