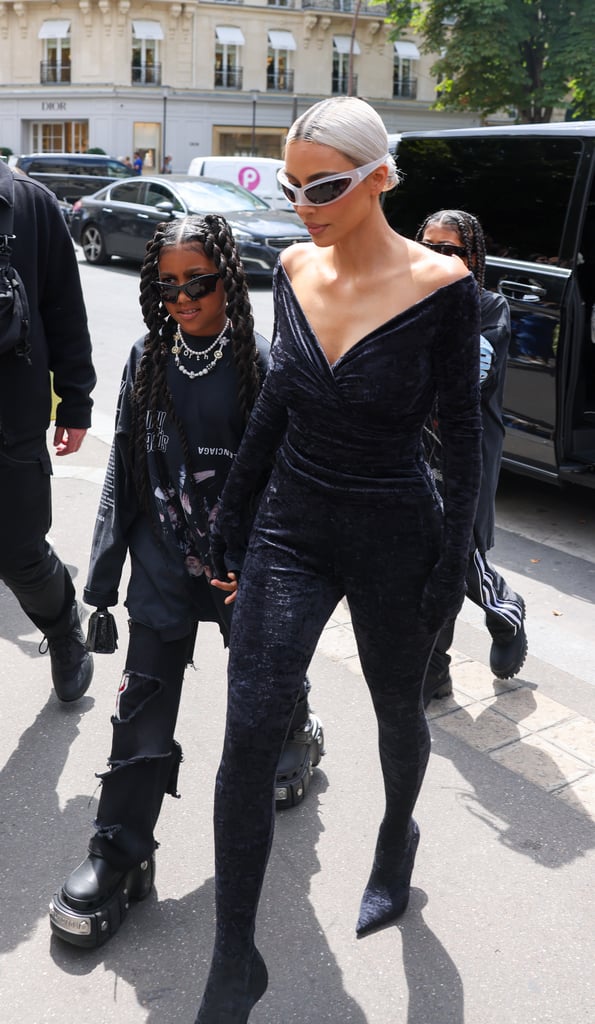 The 2022 Paris Couture Fashion Week was a glamorous affair as always, filled with celebrity sightings and riveting catwalks. Of all the prestigious attendees, one star in particular emerged as the style icon to watch: North West, the 9-year-old daughter of Kim Kardashian and Kanye West.

With a wardrobe full of designer pieces and dedicated front-row seats, the young star garnered all the attention with her burgeoning street style. Taking a cue from her parents' affinity for Balenciaga and her father's penchant for oversize jackets, chunky platforms, and baggy bottoms, the eldest child of the celebrity couple attracted the spotlight as she attended shows alongside her mum and her grandmother Kris Jenner. Throughout her stay in Paris, she wore several interesting pieces, including a cobalt varsity jacket from her father's defunct streetwear line Pastelle, an oversize bedazzled denim jacket, a pinstripe skirt suit, and a series of graphic T-shirts. Her accessories were just as sharp, ranging from futuristic black shades and a faux nose ring to Balenciaga's City and Hourglass bags, plus platform sandals from the brand's collaboration with Crocs.

Meanwhile, mum Kardashian debuted on the Balenciaga Couture runway in a gloved sweetheart-neckline black top, complete with black pantaleggings and a silk draped maxi skirt. Fans were also puzzled when she attended the Balenciaga dinner in a full Couture face mask later that night. Still, the reality star culminated her Paris takeover at the Jean Paul Gaultier show, arriving with her daughter in a plunging pinstripe maxi dress reminiscent of Madonna's daring chest cutouts from the early '90s.

Other stars at the centre of the action included Dua Lipa, Bella Hadid, Christine Quinn, Nicole Kidman, and Naomi Campbell, who also walked the Balenciaga show. They later joined a slew of other celebrities like Alexa Demie, Emily Ratajkowski, Offset, and Tracee Ellis Ross at the brand's dinner. Scroll on to see what everyone wore, as well as other front-row guests at Chanel and Jean Paul Gaultier.