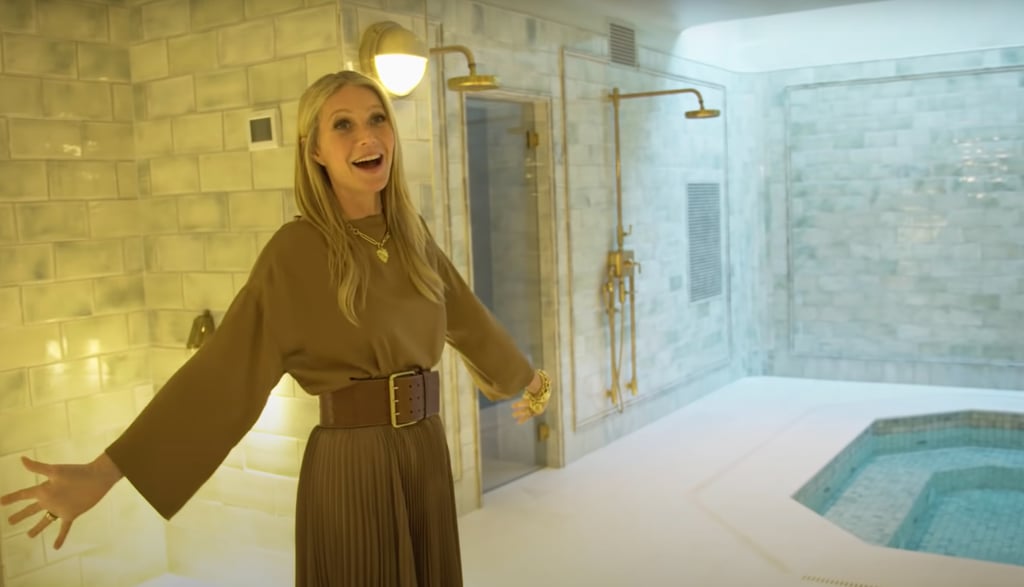 Gwyneth Paltrow's Home Has Its Own Spa, Which Is Very Goop of Her

Right under "actor" and "Goop founder," Gwyneth Paltrow can now add "interior designer" to her list of jobs. As part of the upcoming March issue of "Architectural Digest," Paltrow welcomed viewers into her newly built home in Montecito, CA, after spending a whopping six years designing it. During Paltrow's house tour — with its sky-high ceilings, innumerable windows, and reclaimed fireplaces at every turn — she describes the design of her home as a "Parisian apartment set within an old European barn." As the tour starts, viewers begin to see a great deal of European interior-design influence, which Paltrow attributes to her time spent as "an ex-pat in Europe."

Designers Robin Standefer and Stephen Alesch of Roman and Williams helped Paltrow achieve the vision for her Montecito home, beginning in her custom-built entryway, which features a striking fireplace, tall ceilings, a large window, and a reclaimed black-and-white tile floor inspired by her time living in London. Most other aspects of Paltrow's home also hold personal resonance, including her furnishings. AD100-featured designer Brigette Romanek, who's also a longtime friend of Paltrow's, helped the actor bring her personal visions to life, even when they didn't see eye to eye. "I thought I'd get a few great pieces and it would all be fine, but as time went by, I realised that there were so many layers — so many things that needed attention — that I couldn't pull it off by myself."

Paltrow's single-story home is traditional yet contemporary, liberally mixing reclaimed elements with lavish, modern accents. And, because this is Gwyneth Paltrow's home after all, it even features a sprawling at-home spa. "Maybe I can write it off as a business expense," she joked while standing inside her lavish, Parisian-inspired hideaway that's fit for a royal, echoing and dotted with gold showerheads, robes, and small pools. According to Paltrow, the home is run entirely on solar power and includes an environmentally friendly grey-water system — very on-brand for the wellness-obsessed Goop creator.

Related:
I Truly Lost Count of How Many Couches Alicia Keys Has in Her Dreamy California Home
Previous Next Start Slideshow
Architectural DigestCelebrity HomesGoopGwyneth Paltrow